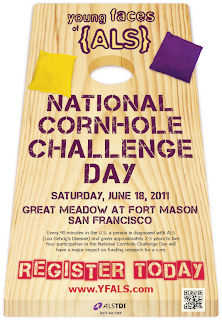 Last Saturday, June 18th, the first ever nationwide fundraiser benefitting the Young Faces of ALS was held in 14 cities across the country.  All over the US, people of all ages were playing the classic tailgate game, cornhole.  Not only was everyone having a great time, they were getting the ALS Therapy Development Institute (TDI) one step closer to finding a cure, or at least an effective treatment, for ALS.
As mentioned in a previous post (http://wagshoppermarketing.blogspot.com/2010/09/why-volunteer-why-not.html), WAG became involved with ALS TDI and the Young Faces of ALS campaign over a year ago when I started working here.  The volunteer spirit must be contagious, as everyone here at WAG has contributed their skills in someway to help raise awareness and money for this disease.  As soon as it was determined that the national fundraiser would be a cornhole tournament, WAG set to work designing logos, posters, flyers, e-mailers, banners, etc.
Planning this event was no small task.  I worked with my friend’s family to put on the local event in San Francisco, as well as working with the people at ALS TDI to figure out the logistics of the event on a national scale.  The San Francisco tournament was held at the amazing Great Meadow at Fort Mason.  We took a gamble with June weather in the city, but we were so lucky that it paid off.
The event in San Francisco was nothing short of amazing.  About 150 two-person teams played in the tournament, and at least 100 spectators spent the day at Fort Mason enjoying the competition, beer, music, food and raffle.  The Aidells sausages were hot off the BBQ, bags of PopChips were being opened left and right, Gordon Beirsch beer was flowing, and DJ Leethalmix kept the energy high.  What is most amazing…all of these things were donated.  Companies recognized a good cause and gave willingly of what they had that we could use.  Seeing all the people that showed up to work as volunteers was another amazing sight.  Some people found our event on Volunteer Match, others were just random sign-ups, and then there was Simply Hired that brought 15+ volunteers as part of their volunteer day program.  Everyone was hustling to make the event run smoothly, and did so with a smile…all day.
If a day comes where my faith in humanity needs to be restored, I will think back to June 18th, 2011.  It was great to see all the people that love and support my friend there, but greater than that was seeing all the people there that don’t know my friend from a hole in the wall.  People that saw a poster hanging in a bar, an ad on Facebook, or through word of mouth and decided to devote their Saturday to playing cornhole for a cause.  The highlight of my day, was meeting a group of men who came after seeing the WAG designed poster hanging in the window of a dive bar on Polk St.  I specifically remember hanging that poster too, and thinking that this particular bar just was not our demographic, but what the heck.  One of these men saw the poster and recognized ALS as the same disease that had killed his friend’s mom two years ago.  Not only did he round up his friends, but he brought TEN TEAMS, and wants to get his company involved with the Young Faces of ALS!  He promised to bring 50 teams next year.   Just when I felt that maybe all the hitting of the pavement we did with posters and flyers may not have paid off, it did so ten-fold.
Across the country, we met and then exceeded our $100,000 fundraising goal.  But maybe even more importantly, we brought awareness of ALS to thousands; and unlike money, that is something that can’t run out.
Immediately after the event, I went home and thought of the improvements I would want to make for next year: #1- MAKE IT BIGGER!  Next year, not only do I believe that all of this years participants will come back to challenge the 70+ year old Mr. Sagali and his son for the San Francisco title, but I’m confident that the spirit of fundraising (and simply a good time) will spread to those around them- just as I am grateful that it did here at WAG. 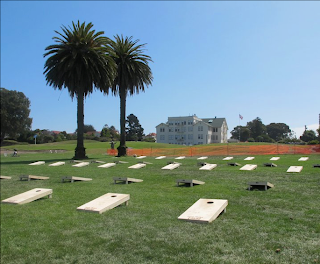 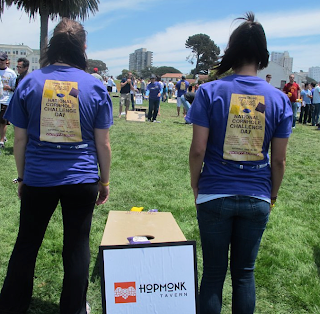 Posted by Design Powered by Shopper Insight at 12:15 PM