Designing the Identity for a Gastropub

Identity for a new Gastropub? Sure. And just what is a Gastropub? According to British food writer Diana Henry in The Gastropub Cookbook, it’s a “a place in which you can have a drink, but which also serves great food.” Which is exactly the concept behind Handles Gastropub in Pleasanton, California. WAG was approached by a trusted marketing professional and a 16-year WAG client, Dave Ritterbush, to design identity for a new restaurant he was opening with a few partners in downtown Pleasanton in the old historic Pleasanton Hotel. They wanted a Northern California feel to their identity, along with touting the great food and drink. After the creative brief was digested, we went online to see what other gastropubs in the area, the State, the Country and ‘across the pond’ had going on. I’ve got to say, for something I’d never heard of before, there was a ton to research.

Our first presentation leaned on the NorCal and pub references, even down to the fonts–some of which were pulled from the London Underground signage for that authentic “pub” feel. We liked our initial designs and so did our clients, but with every discussion there arises a new consideration... After seeing the “Northern California look” on paper (or computer screen), our clients decided the design focused too much on a “place” which might be a future problem if the concept was extended outside of the Northern California. What did attract them was the tap handle shown on one of the comps. But it needed refinement. And we refined the hell out of it. While in retrospect we may have gone a bit too far, the ‘red’ concept did give us the logotype which endured to the finish.

Add in some more refining, and it quietly began to dawn on us what we had in hand was an extraordinarily handsome beer label... 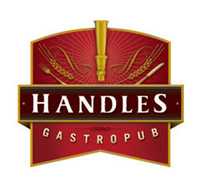 OK, no problem. Keep it for later. There could be beer bottled sometime in the future at Handles.

So what was still working hard for us? Well, the original tap handle idea, the logotype and the color scheme. The barley references were dropped because Handles was also going to be serving several wines (not to mention cocktails). Everyone agreed that the color palette was spot on so we went back and worked out several black-and-white concepts for discussion. Happily, two of the designs grabbed everyone immediately.

Dave liked the poster feel of the large handle, but was really taken with the horizontal version in particular. When Dave asked our opinion (and we were totally with him on the logomark), I told him he had “a kick-ass logo” that he was going to love. He agreed. Of course, there were a few changes to the final. We wanted to make the logotype unique, so we extended some of the horizontal lines (lowering it in the “H” and “E”). And that was about it–the Handles logo was complete. Or so we thought. Dave really really really liked another logomark and didn’t want to walk away from it.  Being the exceptional marketing person that he is, Dave knew that any brand could have secondary logos and most do, thus a secondary mark, Handles on Main, was launched. This secondary mark was so well received that it was used on glassware, coasters, t-shirts, hats, and some signage. In fact, when you visit Handles, this is the logomark that will greet you inside. That is, unless Dave or one of his partners Brian Hampton, Brent Schwager, or Chris Hampton, greet you personally as Handles is sure to be a neighborhood favorite very soon.

All in all, a very satisfying project for WAG. Time for a drink and a bite of food. At Handles, of course.