Being Run Over by Product Placement 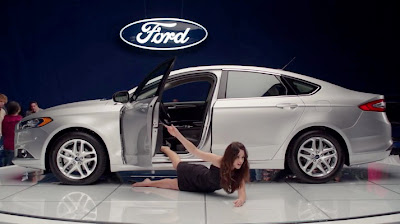 Product placement has been around for years. For the most part, it’s in the background, and not too obnoxious. Lately, however, the placement can be insanely over-the-top.

That was the case with a recent “New Girl” episode - one of my favorite shows, partly because I adore Zooey Deschanel. I’ve liked her in movies (500 Days of Summer, Failure to Launch, Gigantic, heck, even Elf), as well as her partnership with Matt Ward in the music duo She & Him. She did a knock-out version of the Star Spangled Banner before Game 3 of this year’s World Series - if you missed it, here it is on You Tube: http://www.youtube.com/watch?v=7gfBcsiyvDsZooey SIngs National Anthem. Not to mention she’s just incredibly cute. And yes, my wife understands this little obsession. Ask her about Johnny Depp sometime...

In the aforementioned episode, Jess (Zooey) agrees to fill in for her model friend who is too hung over to work a car show for Ford. Jess gets made up and is handed a pair of five-inch heels to prance around in. Of course, being the “earth-girl” type, she struggles with the height of the heels and uses the Ford Focus to help regain her balance several times. While she is hanging on - or falling on - the car, a Ford executive is issuing talking points about it. The dialog on the show during the scene sounds like it was pretty much scripted by the ad guys at Ford.

In the blog “Brands and Film”, written by someone named Erik Renko who is head of consumer analytics at Mercator, the biggest retail company in Slovenia (Slovenia?), we get the Ford side of the coin: “The whole sequence lasted around three minutes and the Ford guy presented several characteristics of 2013 Ford Fusion. The integration in New Girl showed us that Ford has a sense of humor. It looked like they let the writers of New Girl be creative. All in all: a great placement for Ford.” Wow, Ford let the writers be creative. How nice of them.

Closer to home, Michael Kamins, associate professor of marketing at USC’s Marshall School of Business, has this to say about egregious product placement: “I would bet (younger viewers) are not as cynical toward advertising. So maybe they're more accepting on the face of it because it's not an ad. . . . It's truly product placement, but it's a sneaky way of seducing the audience.”

Well, not that sneaky in this case. But he has a point about the audience. Here’s a quote from a “New Girl” viewer I found in the blogosphere: “That wasn't that bad for product placement, since it actually made sense given the situation.” Really? Are we that brain dead?

Yes, these deals help pay the bills for scripted television and seem to have become a necessary evil in an era when many viewers record shows on digital video recorders and then skip the commercials, or, if not recording shows, at least hitting the mute button during the commercials when watching live. But good product placement should be subtle and not hit the audience over the head with a hammer the way they did in “New Girl”. After being bludgeoned by Ford for three minutes, I was ready to say goodnight to Zooey and the rest of the cast for good.

I’ve got an idea. Instead of intruding on our entertainment sensibilities with dumb, boring and obnoxious product placement, why not make COMMERCIALS that people will watch? Or is that too hard? I’m a big Apple user, but if I were in the market for a smart phone today, I’d be considering a Samsung Galaxy S3 based solely on advertising. This is a great spot: http://www.youtube.com/watch?v=vQYa-bUQhrA

OK, well, in spite of this little rant I’m still watching “New Girl”. And I’m also still muting MOST commercials. But if the medium is indeed the message, then we are plunging headlong down a very slippery slope with what seems like great abandon and enthusiasm. And that doesn’t bode well for the future of scripted shows. Maybe Ford needs its own reality show. Coming soon, Survivor: Ford, with nothing but product placement! A ratings hit? Or would we finally turn off the channel for good? I’m guessing ratings hit...
Posted by Design Powered by Shopper Insight at 2:08 PM No comments: